Here's what she said:  "Isn't she late to start walking?"

"She" was a random stranger who interjected her opinion into my life whilst holding the tiniest baby who was, as a matter of fact, doing absolutely nothing, let alone walking.  "She" caused me to second guess my girl's development, although knowing matter-of-factly that was AK was just fine.

Truth be told:  AK walked late.  There.  I said it.  As a first time Mom, and one who has really tried to keep it as simple and serene as possible (HAHA- Parent and serene in the same sentence), it became a daily attempt to refrain from worry.

At her fifteen month appointment, which was held closer to her sixteenth month birthday, the pediatrician started the spiral into questioning her development.  Although I sincerely believe he tried to keep the conversation as nonchalant as possible, it was quite difficult to remain stoic while he stated, "Let's go ahead and get an appointment with an OT just to be sure there are no developmental issues."  Here's the thing:  I knew, without question, that there were no developmental issues.  Just like I knew at ten weeks pregnant that she was a girl.  I just knew.

But, I started questioning.  Why was she not walking?  Why did she consistently choose to crawl? Was it the billions of ear infections that have thrown off her balance?  Was I carrying her too much?

In her classroom at school, she was one of the oldest children - and the last to walk.  But, walk she did. One week shy of her seventeenth month birthday. As I was reminded by a dear friend, "Sarah. Chill. She's not going to crawl when she's four. She's just not." Thank you, dear friend.  She's not. And, she didn't. 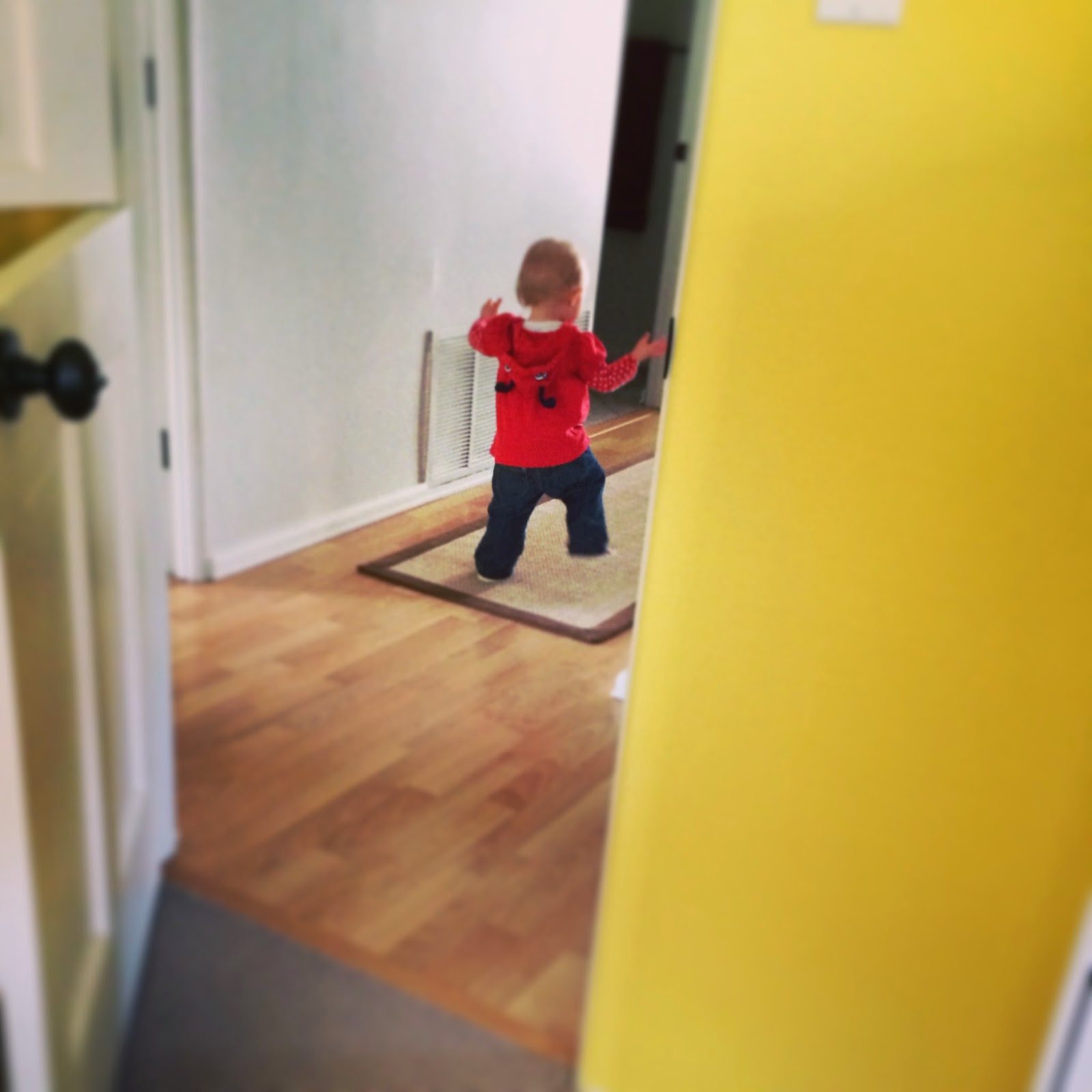 AK's first word was spoken at around four months. And, as much as you may not believe me, I have video to prove it. It was, of course, Dada. But, it was said deliberately in reference to her Dad, repeated and done several times. Her vocabulary growth took a bit of hiatus after that, until right around eleven months when she perfectly uttered the word "uh-oh." The "oh" causing her little lips to purse perfectly. From that point forward, it's been non-stop:  duck, dog, wow, up, down, out, eyes, purple, more, ball.  A new word every day, it seems.

My point in telling you is this: She chose to develop her language skills first.  Even if this statement is not scientifically proven, I believe it. That's just where she chose to focus. Language and fine motor skills took precedence over choosing to stand erect and walk like Momma. Ultimately, she is going to do it all until she becomes a fully functioning, walking, talking little person.

1.  Every child develops at a pace conducive to him or her as an individual. Unless dealing with significant developmental delays, she will walk, talk and do puzzles - all on her own time. She is her own person, after all.

2.  Don't compare. This one cannot be emphasized enough. Tracy's kids both walked around their first birthday. Many other friends have kids who walked somewhere between one and seventeen months. I hear some even go until they're eighteen months.

2.  Don't allow random, insignificant strangers to elicit a response or concern that is completely unjustified.

3.  For heaven's sake woman, chill out. (Yup. Second time I have told myself this. When will I start listening? Your guess is as good as mine).
Posted by Two Parent Simply at 12:43 PM